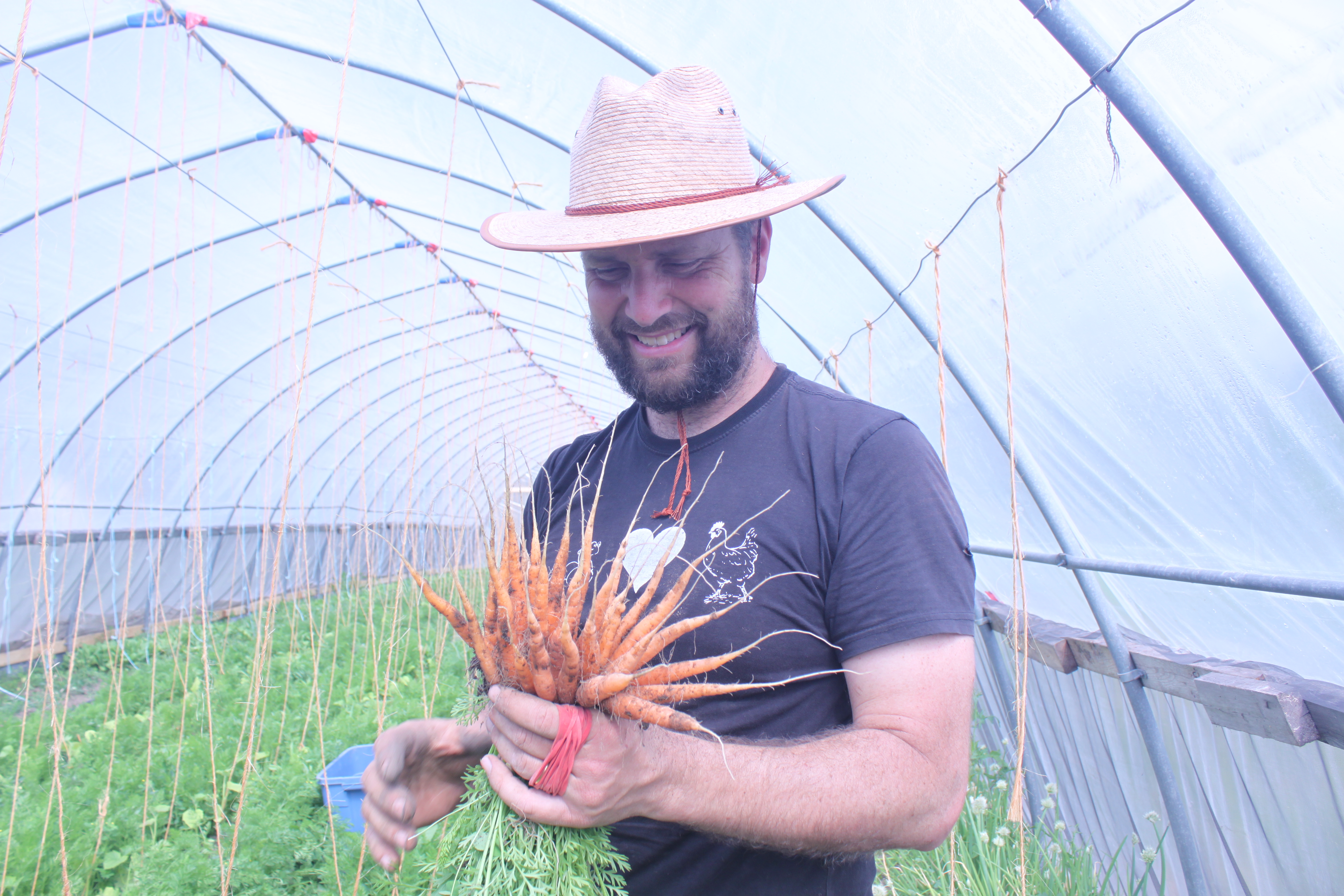 Have you ever been disappointed with the quality of produce available on supermarket shelves during winter months? Vegetables grown elsewhere and shipped long distances to Canada lose their freshness and lack flavour when compared with their locally grown counterparts. This winter Common Ground Farm is making the dream of having fresh local produce available all year long a reality with the introduction of its winter CSA subscription.
CSA stands for Community Supported Agriculture, a membership program where customers receive weekly shares of the harvest from Common Ground Farm. Each week customers pick up their CSA box filled with fresh in-season vegetables at either the Horton Farmers’ Market in St. Thomas, the Western Fair Farmers’ Market in London, or directly at Common Ground Farm. The farm has traditionally offered CSA programs in the spring, summer, and fall but this year, it will begin to offer bi-weekly CSA boxes in the winter as well.
With ample cold storage and four hoop houses, the farm is now able to offer customers a variety of fresh locally grown vegetables even during the frigid Canadian winter. These hoop houses allow Common Ground Farm to start crops earlier in the spring and grow later into the fall. The recent addition of cold storage will allow the farm to store certain vegetables for much longer than in previous years.
Common Ground Farm is able to grow a little bit of a lot of different types of vegetables because it sells its products directly to customers through the CSA program and at local farmers’ markets. Beginning in the spring customers can enjoy asparagus, rhubarb, mixed greens, spinach, and several types of vegetables such as carrots that have been kept in cold storage from the last season. From June to October, potatoes, carrots, zucchini, peppers, tomatoes, beans, broccoli, radishes, onions, peas, cucumbers, and fresh herbs also become available. From Thanksgiving to Christmas is when the largest amount of vegetables is available with the addition of sweet potatoes, squash, and pumpkins. In addition to the wide variety of vegetables it produces, Common Ground Farm also raises pastured pork and has a flock of egg laying chickens. These products can be purchased by visiting the farm.

Owner Chris Devries wasn’t always a farmer. He grew up in the country but his family didn’t farm. He had an established career in engineering but began to dabble in gardening on the side. He enjoyed this hobby so much that he decided to start his own farm. It was a gradual process of learning how to make his operation into a successful business but now four years later he is working to create a meaningful connection between customers and the farm.
“When customers come to the farm to pick up their CSA boxes, they see the land where their food is grown, they see the people growing their food, and they see the practices we use. This creates a greater connection than if they were just picking something up off the shelf at the supermarket,” says Chris.
The 40 acre property is tucked away on a winding road in the Elgin County countryside, just south of St. Thomas. The fertile soils of southwestern Ontario and the moderating temperatures of nearby Lake Erie combine to make this location ideal for producing a variety of fresh local vegetables and herbs.  Everything on the farm is grown organically. This means that no chemicals or pesticides are sprayed on produce and that no chemical fertilizers are used. Instead Common Ground Farm uses composted manure and covering cropping to control weeds and enrich the soil. Cover cropping is a process by which cover crops such as clover and grains are grown not for harvest but to break the cycle of weeds and pests. These crops are tilled back into the soil the following year providing it with much needed nutrients.
For more information about Common Ground Farm or to inquire about joining the CSA visit http://www.commongroundfarm.ca/.